The transportation plan API is provided to model the movement of goods across multiple modes of transportation. An example would be a container that is offloaded from a ship and delivered to a facility as a drayage mode, then unpacked and loaded into a dry van as a transload, and finally transported to the end customer as a full truck load. The underlying data model contains the following primary data objects:

Creating transportation plans via the UI 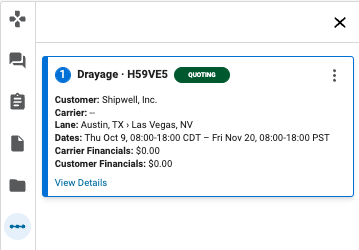 Next, we want to create a transload stage following the drayage move. Which if performed from the UI would be done by adding a new stage the drayage stage. 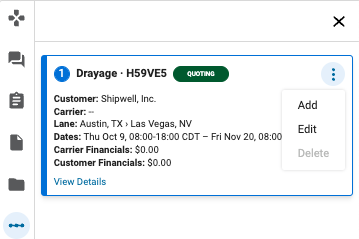 A modal is presented when adding a new stage and in our case we want to create a transload stage. 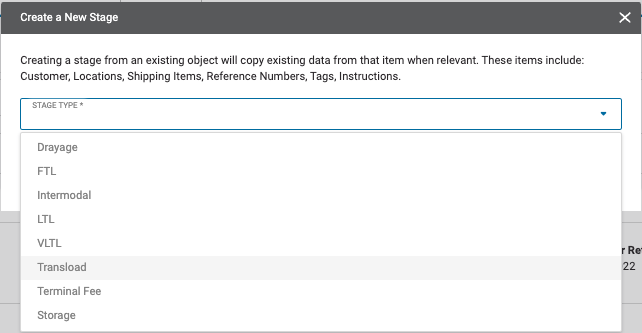 Details are provided for the transload service provider and the stage is created. 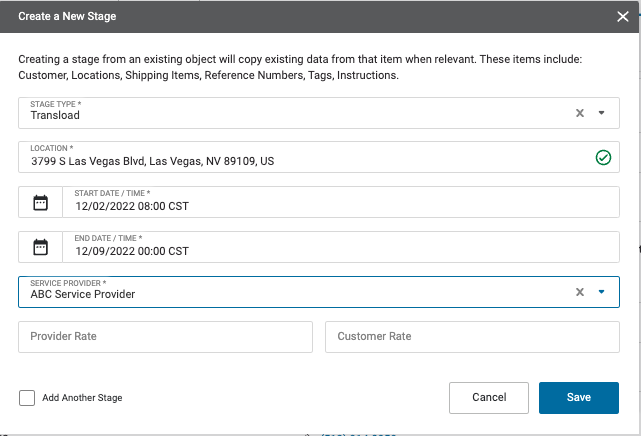 Adding an additional full truckload stage is performed the same way as adding a transload stage except FTL is selected in the model instead of Transload.

Using the API to create a multi-stage shipment

To perform the same actions using the API start by creating a drayage mode v2/shipment using the existing APIs to POST a v2/shipment. Documentation can be found here.

The examples below use the current naming convention for the routes and response bodies that will be updated in the future.

Create a transportation plan using the POST /shipments route to act as the container for the stages we will be creating. There are no required parameters in the request body and in this example none were provided. The resulting response body contains id: of the newly created transportation plan.

Add the drayage shipment as the first stage

Add the drayage shipment created previously as the first stage of the transportation plan by using the GET /shipments/{shipment_id}/legacy-shipment-stages route providing the newly created transportation plan id: as the path parameter and the drayage shipment id in the body of the request as the legacy_shipment_id. The response body contains details of the newly created stage.

Use the id in the response body from the POST /shipments route we started with as the shipment_id and use the id from the POST /services/transload above as the service_id for the POST /shipments/{shipment_id}/services/{service_id} route to associate the service with the multi-stage shipment. In the body below the dependency is defined. We’ll make this transload service dependent on the legacy shipment stage created earlier. Note the directly_depends_on_stages below reference the id from the legacy shipment stage.

The final full truckload stage is added the same way the drayage stage was added to the transportation plan in the fist step of this developer guide and is left as an exercise for the developer to complete this example.